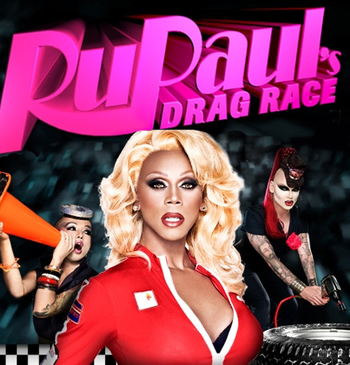 "Gentlemen, start your engines! And may the best woman win!"
"Good luck, and don't fuck it up!"

RuPaul's Drag Race is a reality show in which a group of talented drag queens compete in challenges to impress host RuPaul, the world's most famous drag queen. It originally aired on LOGO from 2009 to 2016, and then moved to VH1 in 2017.

The bulk of each episode consists of a main challenge, usually some form of performance or fashion design, sometimes both. Then the queens participate in a themed runway show, where one is declared the winner of that week, while two others are announced to be up for elimination. The bottom two must then compete to stay on the show with a lip sync for their lives. These tend to result in wigs falling off, jumping splits, death drops, and the occasional kiss. Sometimes both queens survive the lip sync, but sometimes neither are saved. There was once even a six-way lip sync when one team performed especially bad as a unit. RuPaul's decisions are helped by a judge panel, with its current iteration made up of Michelle Visage, Ross Mathews and Carson Kressley (who alternate on the third judge seat), and celebrity guest judges.

There have been twelve regular seasons of the show, with the series renewed for the thirteenth season. There have also been five seasons of All Stars, featuring returning queens from previous seasons competing for the distinction of being inducted into the "Drag Race Hall of Fame". Additionally, an inaugural Celebrity edition premiered in 2020, with the prize money being donated to charity. A list and summary of all seasons can be found on the Recap page.

Drag Race has spawned multiple spinoffs and related programming (see below) and a variety of foreign editions, although only one (RuPaul's Drag Race UK) features Ru as host. A Chilean version, The Switch Drag Race: El arte del transformismo, premiered in October 2015, while Drag Race Thailand premiered in February 2018. In July 2020, Canada's Drag Race premiered on Canada's Crave service, unique in that it has three hosts - US season 11 runner-up Brooke Lynn Hytes, actor Jeffrey Bowyer-Chapman, and fashion model Stacey McKenzie. Right on the heels of that version, in September 2020 it was the turn of Drag Race Holland, based in the Netherlands and hosted by fashion expert and former drag performer Fred van Leer, with model and actress Nikkie Plessen as a regular judge and alternating judges fashion designer Claes Iversen (who designed the season's grand prize dress), actress Sanne Wallis de Vries, and singer Roxeanne Hazes. Spanish, Australian and Brazilian editions have also been announced.

The show has helped to bring Drag into mainstream pop culture. Regardless of how well a contestant does in the competition, most of the queens have found success and a dedicated fanbase after their season.

channel on Youtube (and its own dedicated streaming service, WOW Presents Plus) produce official web shows starring Drag Race queens. Long time staples of the service are:Many other queens have short shows where they talk various topics to viewers in the same vein as Alyssa, Trixie, and Katya:And there are several original series on the WOW Presents Plus platform:
Drag Race-related projects
Miscellaeous projects related to (but not officially part of) the Drag Race franchise include:

Drag Race alumni with their own pages on this wiki include:
Recurring Drag Race challenges