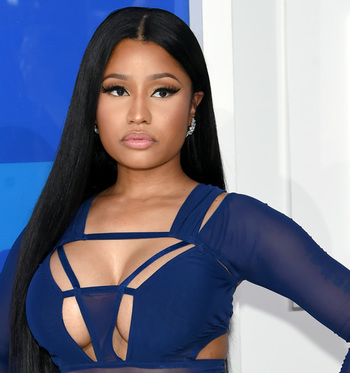 Nicki Minaj (born Onika Tanya Maraj, December 8, 1982) is a rapper, singer, songwriter, actress, and former American Idol judge (for season 12). Born in Trinidad, she attended and graduated from the drama program at New York City's LaGuardia High School, a performing arts school. During that time period, she started rapping and making mixtapes and thrived on the underground hip-hop scene where she got much accolades and praise and even won Best Female Artist at the Underground Music Awards.

She eventually got the attention of Lil Wayne, and was signed to his record label/imprint Young Money Entertainment where she leaped into the mainstream scene by guest rapping on just about every popular artist's song. In November 2010, she released her debut album Pink Friday to generally positive reception, garnering her three Grammy Award nominations. She followed this album up with several more albums, including The Pinkprint, which came out at the end of December 2014 and received a Grammy Award nomination for the (in)famous "Anaconda", and Queen, which came out on August 10, 2018.

Starships were meant to trope: