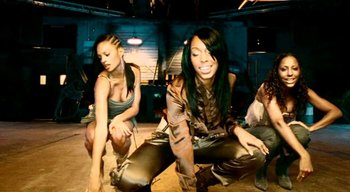 "The way you move...so scandalous..."
Advertisement:

The group was first formed by Sabrina and Alesha, named Face 2 Face. They were joined by Tina Barrett for a while, but she left too and became a member of Simon Fuller's music project S Club 7. Two new members Zena and Sue-Elise replaced her, they changed their name to Mis-Teeq and were signed by Telstar Records. Their debut single "Why?" was a mid-tempo R&B track and later became a hit when it was remixed by UK garage DJ Jam Lamount. Zena left shortly after this, and the group continued as a trio.

Their debut album Lickin' On Both Sides was certified platinum, and the girls gained some chart success in Australia, New Zealand and Denmark. Their second Eye Candy did not match the same sales (only reaching gold) but it did contain their highest charting single - "Scandalous" - which was their only song to chart in the US. It was also used in the film Catwoman (2004). Unfortunately for them, Telstar went bankrupt in 2005 and they announced a split.

Su-Elise has stayed out of the public eye since the split, Sabrina appeared on I'm A Celebrity, Get Me Out of Here! and has been pursuing a solo career. Alesha has had the most success - as a TV presenter on Strictly Come Dancing and Britain's Got Talent.