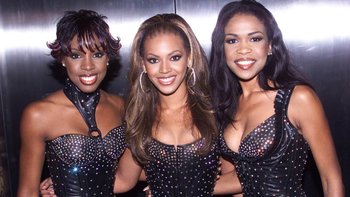 Destiny's Child was an R&B group that consisted of Beyoncé Knowles, Kelly Rowland and Michelle Williams. It formed in the early 1990s, first being a Four-Girl Ensemble with Beyoncé, Rowland, LaTavia Roberson and LeToya Luckett. In early 2000, Luckett & Roberson were replaced with Williams and Farrah Franklin. Farrah left the group that summer, leaving the girls to be a Power Trio. Their singing style took R&B to subgenres of urban, contemporary, and dance-pop. "Bootylicious", "Say My Name" and "Bills, Bills, Bills" are some of their most famous songs.

Beyoncé became an obvious Face of the Band. While she has moved on to become an internationally successful solo artist, the other two have also had respectable careers in music, film, and Broadway. All three members retired from the group in 2006 to focus on solo ventures.

The band has reunited several times since then, such as for the 2013 Super Bowl halftime show and to record new songs for a new Greatest Hits Album titled Love Songs.

"All the women who are independent, throw your tropes up at me":