Film / To Catch a Thief 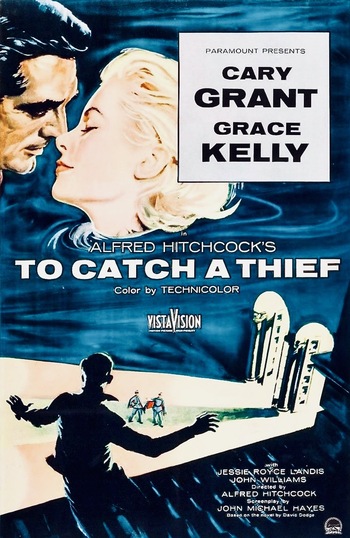 To Catch a Thief is a 1955 romantic comedy/thriller film directed by Alfred Hitchcock, based on the 1952 novel of the same name by David Dodge.

The protagonist is John Robie (Cary Grant) a retired jewel thief who lives on the French Riviera, since the government pardoned his crimes because he took part in the French Resistance. However, a series of robberies happen, that closely resemble his style, and the police suspect him. Robie, with the help of insurance man Hughson (John Williams—no, not that one), plans to capture the burglar in the act to prove his innocence. He obtains a list of the owners of the most expensive jewels on the Riviera, who are the likely targets, from Hughson.

The first names on the list are wealthy American widow Jessie Stevens (Jessie Royce Landis) and her daughter Francie (Grace Kelly). Robie befriends them, but Francie soon sees through his disguise; however that doesn't bother her, because she thinks stealing jewels might be fun. She seduces Robie; however, when her mother's jewels are stolen, she feels betrayed, and calls the police on him. Robie escapes, he and Francie eventually clear up the misunderstanding, and capture the real thief together.