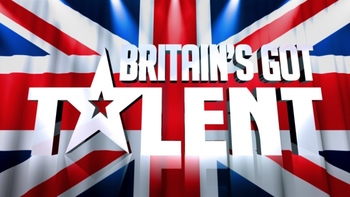 Britain's Got Talent is an ITV Talent Show where people perform talent acts with the aim of winning a public vote and perform in front of HM The Queen (or another member of The British Royal Family) at the Royal Variety Performance. Each contestant performs in front of three or four judges. The judges have three/four buzzers and can push them if they want the act to stop. All buttons pressed- the act stops. Tolerated primarily for the ridiculous and often hilariously bad auditions and the inevitable scathing responses.

The two hosts of the show are Ant and Dec, who serves as the substitute judge during the auditions when one of the other judges is ill or otherwise busy since series 8 in addition to getting the chance to press the golden buzzer as well.

The show also airs a spin-off, Britain's Got More Talent, after each episode of the main show on ITV 2. This show is hosted by magician/presenter Stephen Mulhern and focuses more on the backstage elements of the show, with a stronger emphasis on comedy.

Has a Transatlantic Equivalent in the form of America's Got Talent, which technically debuted first in 2006 due to issues with the British pilot.