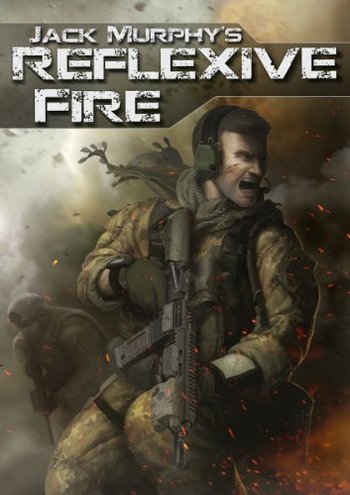 An assassin who is in over his head. A cabal that wants him to lead a secret army. A conspiracy decades in the making.
Advertisement:

Released in 2011, Reflexive Fire is a novel that chronicles the adventures of a former soldier known only as Deckard. It is written by Jack Murphy, a relative newcomer to the military fiction scene, this being his first officially published novel. Deckard is a man possessed of unique talents gained from a lifetime of service in various speecial operations forces within the United States Army. He was eventually headhunted by the CIA for their paramilitary black ops unit, the Special Activities Division, but due to a Noodle Incident he parted ways and continued his soldiering career as a mercenary and assassin.

One day, a call comes in from one of his old contacts with a lucrative and risky job offer. Deckard is given the cover identity Jake O'Brien and tasked with meeting a group of the most powerful men in the world for a single purpose: to train a mercenary unit and be prepared to lead them into combat at a later date. Naturally, such an open-ended assignment invites suspicion and Deckard races against time to uncover the truth behind his employers' intentions. What he finds could lead to the End of the World as We Know It.