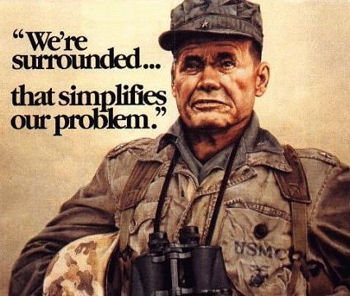 Lt. General Lewis B. "Chesty" Puller (1898–1971), patron saint of the United States Marine Corps, shows the proper response to encirclement.
"Every Marine is convinced they're the toughest guy in the room."
— Capt. Nathaniel Fick, USMC (Ret.), One Bullet Away: The Making of a Marine Officer
Advertisement:

So, you think you miserable lot of baby-faced tropers want to make a trope about us? If you work hard enough you might be good enough to lick our boots. For we are the best in the world and you better know it. When you answer me, the first and last words out of your filthy sewers will be 'sir'! Is that clear, troper?! Louder! I CAN'T HEAR YOU!

Yes, United States Marines are just better. They are a Proud Warrior Race all their own. Every Marine is a Blood Knight and they are held in check only by their Drill Instructor Nasties. They are commanded by Colonel Badasses and General Rippers, and they are the truest devotees of The Spartan Way. They are so committed to their job that they are almost a Church Militant. Do not mess with the Corps. Ooh-rah!

That is the Marine myth. Like most successful myths, it has some basis in fact. The idea is recognizably similar in kind with the myths of several other elite military units, like the French Foreign Legion or the Gurkhas. What makes the Marine myth special is simply that many Americans take pleasure in it and therefore Hollywood does, creating wider mileage.

That said, the "Marine myth" is a myth. Marines are as fallible and human as the rest of the species, and while they are invariably well-trained and dedicated, you find just as many Jerkasses among Marines as you do among every other group on the planet. While they don't always, however, they can occasionally view themselves as the epitome of the human race, even if they actually are not.

If you want to make a Marine more badass, make him a member of USMC Force Reconnaissance ("Force Recon"). If you want to make him even more badass than that, make him a member of MARSOC (Marine Corps Forces Special Operations Command), which is so new (2006) that nobody even knows how badass it is yet. A Marine of recent vintage will also be proficient in the Marine Corps' own badass martial art form — the Marine Corps Martial Arts Program (MCMAP)

Compare Space Marine and A Space Marine Is You, where most of their behaviors, practices and general worldview will remain totally unencumbered by the march of time. A subtrope of Elites Are More Glamorous. The literal trope versions of "Semper Fidelis" (Always Faithful) are My Master, Right or Wrong and My Country, Right or Wrong.