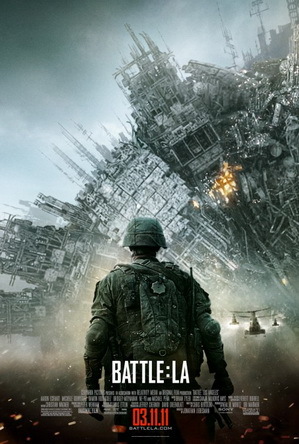 "There are massive casualties in New York, defensive lines are being setup in Boston, and at 13:15 Zulu Time we lost communications with San Francisco and San Diego, their status is unknown. What we do know is that we are the last offensive force on the west coast. We can not lose Los Angeles."'
Advertisement:

Battle: Los Angeles is a science fiction film directed by Jonathan Liebesman. It was released March 11, 2011.

Meteors rain into the ocean a couple of miles off of major coastal cities — one being Los Angeles. Within minutes an alien army marches out of the surf. The suntanning populace on the beach is shredded as the aliens march into the city proper. With the arrival of their aircraft, the aliens quickly establish ground- and air-superiority.

As Los Angeles is evacuated, Marine Staff Sergeant Nantz (Aaron Eckhart) leads his new platoon and an inexperienced lieutenant against the attackers. Their main goal is to evacuate civilians ahead of a planned bombing offensive, but matters are complicated when they must destroy the enemy's command and control center. Meanwhile, similar battles are waged across the world in other cities.