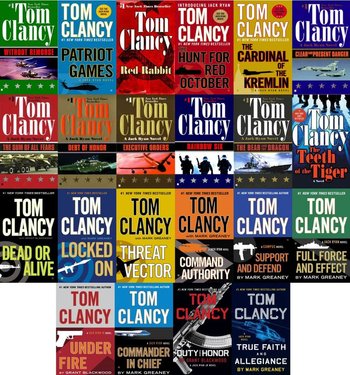 Tom Clancy's most famous series of novels, which focus mainly on CIA analyst Jack Ryan and —to a lesser extent— CIA field operative John Clark. Four of them have been adapted into movies, one inspired series of video games, while a film (Jack Ryan: Shadow Recruit) and a series (Jack Ryan) are reboots of the universe not based on any specific novel. Among fans, this continuity is often referred to as the "Ryanverse."

Film adaptations with their own trope pages include:

Film based on the series, but not an adaptation of any specific work:

The other film adaptations provide examples of: