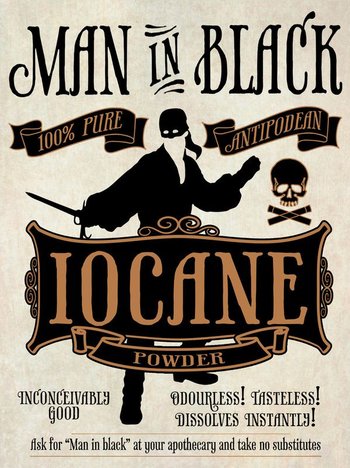 Shackleforth: "Glove cleaner", huh? Say... you sell much of that stuff?
Daemon: Now and again.
Shackleforth: By the way, what's in it?
Daemon: No trace, no odor, no taste, no way to detect its presence. And it's sure. One thousand dollars...
— The Twilight Zone (1959), "The Chaser"
Advertisement:

When murder by poison is depicted in fiction, it never takes more than a drop of liquid or a pinch of powder for the victim to grip their throat, cough a bit, and keel over. Quick, clean, and quiet. The reality is not so simple. To kill someone with poison, either quickly or without arousing suspicion, can be a surprisingly complex process.

Outside of highly controlled chemical munitions, there are very few substances available to the average murderer that can kill a human being as quickly and easily as the poisons of fiction. Famous poisons like arsenic, strychnine, cyanide, etc. require small, repeated doses to build up enough concentrations to kill without arousing the suspicion of the victim. In significant quantities, such poisons can taste extremely bitter, hence why many historical rulers had food tasters. The mechanisms by which these poisons kill can also cause dramatic physical reactions in the victim. While it is true that they were once very hard to detect, these old standby poisons are easily and routinely detected by modern forensic pathology.

The sort of poisons that can kill very rapidly at small doses tend to be staggeringly dangerous to the poisoner himself, not to mention exceptionally hard to come by and hazardous to manufacture.

There's also the matter of "getaway time" — a fast-killing poison is more dramatic, but a slow-killing one is harder to link to its source.

This is generally assumed to be the kind of poison used in a case of Finger-Licking Poison. Frequently has an Improbable Antidote. May or may not be purple or green. Naturally, part of its perfectness is usually that it works on everything. If ingested, expect to see the spilled drink to dissolve the table.