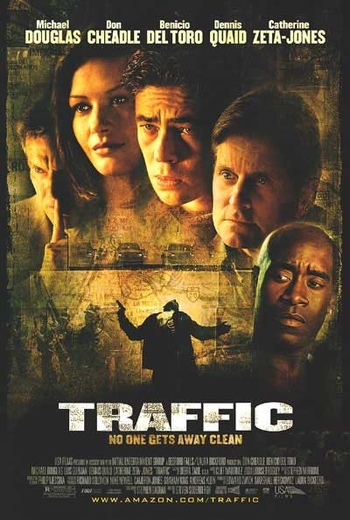 "If there is a war on drugs, then many of our family members are the enemy. And I don't know how you wage war on your own family."
— Robert Wakefield
Advertisement:

A 2000 American crime drama film directed by Steven Soderbergh, Traffic was adapted from the 1989 British Channel 4 miniseries Traffik. With an All-Star Cast headed by Michael Douglas, his future wife Catherine Zeta-Jones, and Benicio del Toro in an Academy Award-winning performance, Traffic also won three other Oscars, including Best Director, only missing out on Best Picture to Gladiator.

In Mexico, officer Javier Rodriguez (del Toro) is assigned to investigate the drug trade by one General Salazar (Tomas Milian). Meanwhile, in Washington, federal judge Robert Wakefield (Douglas) is appointed the new drug czar just as he learns his daughter (Erika Christensen) is an addict herself. In San Diego, two DEA agents (Don Cheadle and Luis Guzmán) finally arrest drug kingpin Carlos Ayala (Steven Bauer). Ayala's wife, Helena (Zeta-Jones), upon learning of her husband's true profession, takes action to ensure his freedom and her own financial security. As more secrets and lies are revealed, these characters learn that the war on drugs isn't as straightforward as it seems.

The movie has many layers of Truth in Television, being a highly dramatized amalgamation of the lives of real people and very common or highly plausible events.

Not to be confused with the '60s-'70s British rock group of the same name. Or with Jacques Tati's 1971 film Trafic. Or Ralph Bakshi's 1974 animated film Heavy Traffic. Or the 2017 suspense thriller Traffik.