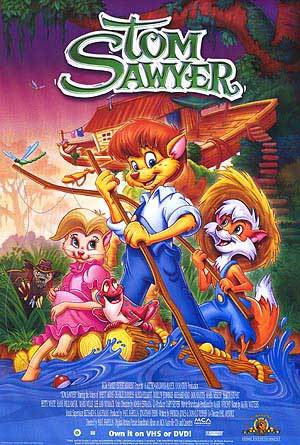 Tom Sawyer (2000) is a direct-to-video animated film by Metro-Goldwyn-Mayer Animation. It's an Anthropomorphic Animal Adaptation of Mark Twain's The Adventures of Tom Sawyer; in this version Tom and Becky are cats, and Huck is a fox.
Advertisement:

Two mischievous boys, Tom Sawyer and Huckleberry Finn, sneak into the local graveyard on the night of the full moon in hopes of finding treasure, but end up witnessing a murder instead. They know they must speak up about what they've seen to help clear the name of the innocent Mutt Potter, who is to be hanged for the crime. That won't be easy though, because the real murderer - Injurin' Joe, a monstrous grizzly bear - is out to get them and silence them permanently. Meanwhile, Tom develops a crush on Becky Thatcher, the new girl in town, but neglects to tell her that he was previously engaged to someone else.