The Dead Have Names 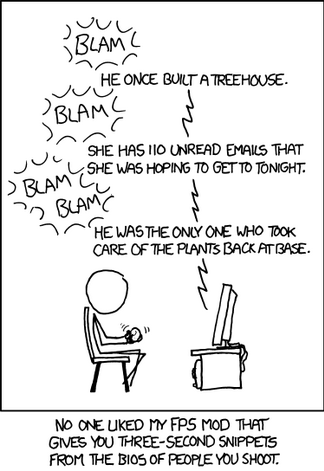 "The Alliance lost eight cruisers. Shenyang. Emden. Jakarta. Cairo. Seoul. Cape Town. Warsaw. Madrid. And yes, I remember them all. Everyone in the Fifth Fleet is a hero. The Alliance owes them all medals. The Council owes them a lot more than that. And so do you."
— Commander Shepard to Khalisah al-Jilani, Mass Effect 2
Advertisement:

The opposite of A Million is a Statistic, when the names of those who died are given instead of just faceless numbers to show respect for their sacrifice. A Sub-Trope of Nominal Importance: a list of a hundred names, often on a War Memorial, hits much harder than "100 people died".

A common variation of this trope is a high-rank military commander memorizing the names of all those who died carrying out his orders, despite not technically having to, usually used to dramatically reveal him as A Father to His Men. Other variations include newspaper articles, a War Memorial, or a database with pictures.

Related to What Measure Is a Mook? See also He Had a Name. A Posthumous Character can be part of this, too, as long as he's listed on the War Memorial. But sometimes, all we know about the characters is their name.