The Cobbler's Children Have No Shoes 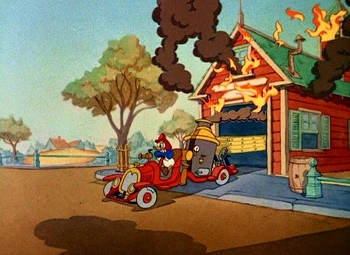 Well, the firetruck is still undamaged...
"Doctors are well-known to be the worst patients. Similarly, anyone with special-ops training is tough to protect; they think they can handle anything."
— Narrator, Burn Notice
Advertisement:

A character is very good at his profession but is completely unable or unwilling to use this ability to help himself or his own family. This is seen most often with therapists.

It may be justified in the case of therapists because to analyze more effectively, a therapist has to be outside the problem. Think of it like a maze. Is it easier to see the path to the exit in the middle of the maze, or looking down from above? In fact, professional counseling and psychology organizations classify counseling those the therapist has an emotional attachment to as a "dual relationship." They are ethically questionable and always to be avoided in professional work.

The same justification can be used for doctors (their emotional attachment can blind them to what's wrong with themselves or those they love, or make them unable to use a risky treatment), so many hospitals have policies that forbid doctors to practice on family members (the exception is when they're the only specialist available, e.g. a venom specialist whose family member just got bitten by a snake). For lawyers, it's not verboten, as it is a legal option, but custom and best practices advise against both self-representation (as in the expression, "A man who represents himself in court has A Fool for a Client") and representing family (by the same principle), except in emergency situations.note Typically, this is the situation where you call up your cousin and say, "Hi, Vince, I know you're a personal injury plaintiffs' lawyer, but I've been arrested in Jersey and need to convince the judge I'm not a flight risk. Can you make it from Long Island to help me out? I promise I'll come to your sister's wedding in June." note Note that it is very strongly discouraged for lawyers to represent those with whom they have had a sexual relationship, and outright forbidden if the sexual relationship began after the attorney-client one.

In a more humorous light, this often gets thrown at guidance counselors or career advisors, along the lines of "why should I get advice on how to structure my career path from someone whose job is 'career advisor'?"

If you happen to be wondering why emotional attachment would stop the cobbler repairing his children's shoes, that's not the reason; he's just too busy with the paid work needed to feed everyone. What’s more, especially prior to the industrial revolution, it was often the case that materials were expensive while labor was cheap. As much as he’d like to make himself and his family some clothes, furniture, etc. as luxurious as what he’d sell to his customers, the artisan wouldn’t be making enough of a profit margin on his sales to buy quality materials for a personal project without a customer to foot the bill. Whatever he did make for his household would be much less fancy. Finally, the advent of industrial technology means that hardly any goods can be economically produced without a lot of expensive factories and equipment, and that means that the workers who produce stuff are generally employees rather than owners of the business. Just because somebody works in a factory that makes X doesn’t necessarily mean they're paid high enough wages to afford X, or that they get to take home free samples.

Another name for this is "vocational irony", which is a form of situational irony. This is the supertrope of one type of Preacher's Kid, a.k.a. "The Minister's Children Have No Morals".

Compare the No Self-Buffs, the magical equivalent.