Literature / The Earth, My Butt, and Other Big Round Things 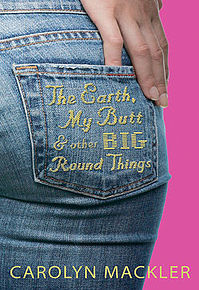 The Earth, My Butt and Other Big Round Things is a 2003 Young Adult novel by Carolyn Mackler
Advertisement:

Virgina "Ginny" Shreves is an girl with a larger than average body and an inferiority complex. With her beautiful sister, built-like-a-Greek-god brother, and successful parents, her self esteem isn't helped. Ginny's main worries are like any other teenager; her weight, her sort-of-boyfriend, and the fact that her best friend has moved away.

Amazing how a simple phone call can shatter the world as you know it.

The Earth, My Butt and Other Big Round Things covers many controversial topics, such as eating disorders, self harm, date rape, underage drinking and exploring one's sexuality. It has even been banned from some middle schools, due to the sexual content and profane language.

Followed by The Universe Is Expanding and So Am I in late 2018.

Tropes present in this novel include: