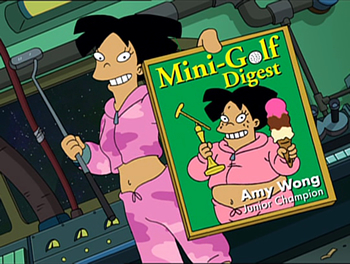 Ben: So the only thing you did was stop drinking beer?
Andy: Yeah. I lost 50 pounds in one month.
Ben: How much beer were you drinking?
Andy: [chuckles] I know, right? Probably too much.
—Parks and Recreation
Advertisement:

A character that used to be fat, but now isn't.

Sometimes, part of a character's personality is driven by the fact that they were once overweight. Having a thin character revealed to have once been fat can tell you plenty about them. It can tell you that they have a past they aren't proud of and that they eventually decided to care enough about their health and appearance to do something about it. It also shows that the character developed the strength and will power to take control of their life and get what they want, that they have self-discipline and motivation.

Be that as it may, a formerly fat background is not always all sunshine and rainbows. It can also imply a lot of self loathing and damaged self esteem, too. Many times, their slim-down can be a symptom of a desperate need to be accepted by society and an unhealthy dependence on what others think of them. The positive and negative attitudes are not mutually exclusive either, leading to many Formerly Fat individuals to have complicated self-images.

Frequently an Informed Attribute, especially with live-action: the character will be played by an actor who's always been average-weight, and there will be no flashbacks to the period when the character was heavier.

Whenever a celebrity loses weight, expect a discussion over whether they looked better before or after, with plenty of size-shaming getting tossed in both directions.

For the inverse of this trope, see Formerly Fit. Can overlap with She Is All Grown Up if the character was fat when a child but lost weight when entering adulthood.

Minnie Mouse reveals that she used to be absurdly obese before using a sauna to become skinny.

Minnie Mouse reveals that she used to be absurdly obese before using a sauna to become skinny.