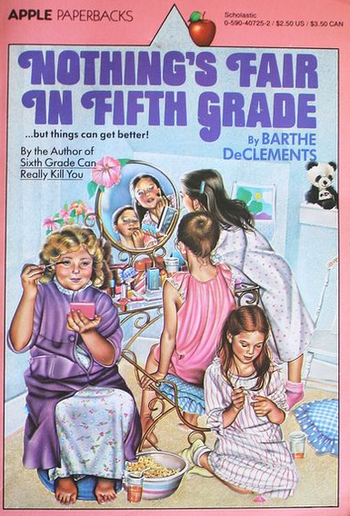 Nothing's Fair in Fifth Grade, a novel by Barthe Declements, won several awards for being the most popular children's book in thirteen states. The book was first published in 1981.
Advertisement:

It's a story set in an elementary school in the Seattle, Washington, suburbs, involving a student, Jenny, who is initially repulsed by a new transfer: morbidly obese classmate Elsie Edwards. At first, Jenny can't stand Elsie any more than the other kids, especially after Elsie - who is on a diet - is caught stealing her classmates' lunch money from their desks so she can buy junk food. However, one day, she runs into Elsie crying in the girl's bathroom. Inconsolable, Elsie spills out her life story to Jenny, along with the details on her cold, unloving mother. Jenny, beginning to see her as human for the first time, vows to stick up for her - and she does. Despite resistance from other kids, she eventually brings her friends over to her side.

Over time, Jenny tries to deal with her own personal problems (having a hard time with math, her parents' occasional arguments), as well as help Elsie with her own. Unfortunately, Jenny's attempts to right things sometimes cause more trouble - or trouble just arises through other means - but things gradually get better over time.

Near the end, when Elsie has been doing well, one of Jenny's friends thumbs a ride and hitchhikes, and Jenny and the rest (including Elsie and Elsie's little sister) go along for the ride out of fear of leaving their friend behind. The man drives far away from the kids' intended destination, and they eventually end up having to escape the man's truck. When they do, Elsie's little sister stupidly goes back in the truck to retrieve her purse, and it drives off with her in it. The kids, horrified, walk to the nearest building, a tavern, and call the police. Yet another strike against Elsie, and when Elsie's mom finds out, she tells her ominously, "This is it for you, Elsie," suggesting that Elsie's being packed off to a boarding school next year is now a certainty.

Things get better over time even with more disasters and strikes against Elsie's good behavior, and it ends on a positive note, thanks largely to teacher Mrs. Hanson, who manages to talk Elsie's mother out of sending her away to boarding school by telling her how much Elsie has turned herself around.

There are two direct sequels, How Do You Lose Those Ninth-Grade Blues? (1983) and Seventeen and In-Between (1984) (both narrated by the slimmed-down but still insecure Elsie as she gets a boyfriend and struggles to come to terms with her still-strained relationship with her mother). There are also a few side stories, including Sixth Grade Can Really Kill You (1985), which relegates Elsie and Jenny to the sidelines and focuses on Helen, a girl with learning disabilities who hides her insecurities by acting out in class, and I Never Asked You to Understand Me (1986), which introduces Didi, who attends an alternative high school for troubled kids, and reintroduces Stacy (a minor character in Sixth Grade Can Really Kill You), who has a home life so troubled it makes even Elsie's look idyllic. None of the sequels or side stories are anywhere near as popular and beloved. It also has a prequel, The Fourth Grade Wizards (1988), which gives backstories to Jack and Marianne, two minor characters.

The book has believable characterizations and very accurate dialogue, and portrays the kids' home and school lives very realistically. This makes it an excellent aversion of the most common mistakes children's book authors make, considering that most of them have never been really good at portraying kids or their lives this realistically, especially while still being fun to read.