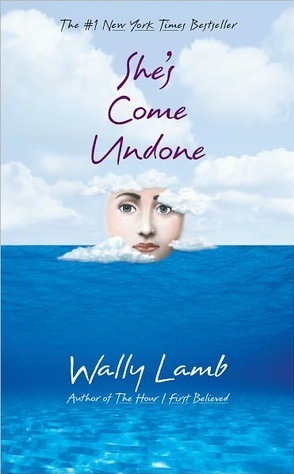 "Mine is a story of craving: an unreliable account of lust and coveting that began, somehow, in 1956 on the day our free television was delivered."
— Dolores Price, She's Come Undone
Advertisement:

She's Come Undone is a 1992 novel by Wally Lamb, his debut. It wasn't a huge seller when it first came out, but after it became a selection in Oprah's book club in 1997, it was suddenly a huge hit. It is notable for being written by a male author, but narrated by a female protagonist. The novel follows the life of Dolores Price from age four to forty.

After her parents' divorce and her mother's mental breakdown, Dolores goes to live with her rigid, undemonstrative grandmother, where she drifts friendless through middle school. When her mother finally returns from the mental hospital with a new attitude and little time for her daughter, tensions rise between the three very different women. With no one else to confide in, Dolores develops an adolescent crush on their handsome upstairs tenant Jack, who takes advantage of her innocent affection by raping her.

Dolores spends the next few years isolated in her bedroom, numbing her pain with junk food and endless hours of television, and eventually graduates high school weighing over 250 pounds. Her only defense against a cruel world is a bitingly caustic mouth, which she uses to punish and manipulate the people she believes failed to protect her. But when her mother dies, Dolores' guilt drives her to fulfill her mother's final wish of seeing her daughter attend college, only to learn that the world outside her bedroom isn't much kinder than the halls of her high school. Alone, confused, and at the end of her rope, Dolores attempts suicide...but survives, spending the next seven years in a mental institution where she begins to put together the jagged, painful pieces of her life.

And that's only about half the book.

In spite of its unending parade of tragedy, heartbreak, and loss, She's Come Undone manages to have plenty of wit, warmth, hope, and redemption tucked between its pages, with a heroine who is both infuriating and utterly captivating. Even when she's at her least lovable, you can't help but root for Dolores to rise above adversity.