For other works titled "The Sundering", see here. 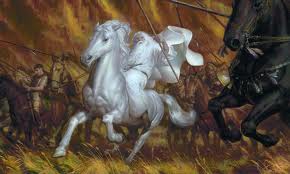 Malthus the Counselor leading Haomane's Allies to war
When the unknown is made known, when the lost weapon is found, when the marrow-fire is quenched and Godslayer is freed, when a daughter of Elterrion weds a son of Altorus, when the Spear of Light is brought forth and the Helm of Shadows is broken, the Fjeltroll shall fall, the Were shall be defeated ere they rise, and the Sunderer shall be no more, the Souma shall be restored and the Sundered World made whole and Haomane's Children shall endure.
— Haomane's Prophecy
Advertisement:

The Sundering is a fantasy duology by Jacqueline Carey. The two books are Banewreaker (2004) and Godslayer (2005).

The Sundering tells a story deliberately very similar to J. R. R. Tolkien's stories (The Silmarillion and The Lord of the Rings), but with the twist that it is told from the perspective of the "villain" characters.

It is not a true case of Villain Protagonists, though, because the story makes clear that the "evil" characters are really not evil at all, merely misunderstood.