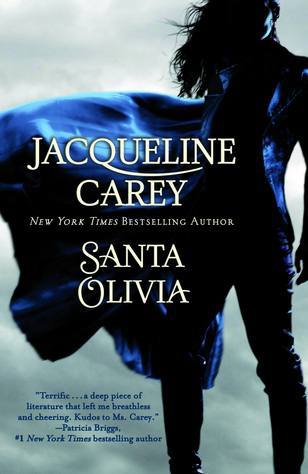 Santa Olivia is a novel written by Jacqueline Carey, whom you may recognize from Kushiel's Legacy. Much lighter fare than those books, Carey once described Santa Olivia as a "post-punk desert urban fantasy about girl’s love and boxing."

Now that I’ve got your attention…

The story begins in Santa Olivia, a small town on the border of Texas and Mexico, sometime in the not-too-distant future. An epidemic hits the world, and Mexico worse than most. A general, Santa Anna, called El Segundo by most, starts causing ruckus in order to get aid from the United States. Things get out of hand, some explosions are had, and when the dust has cleared, a barrier zone is created to keep Mexico out. Santa Olivia, along with a couple other towns here and there, happens to fall in the barrier zone, and so the inhabitants are given a choice. They can either stay, and forfeit their citizenship, or figure out some way to move themselves into the States. Most, being too poor to move, or too rooted in the town, decide to stay. An outpost is built next to the town, and in exchange for supplies and necessities, the town folk provide menial labor, restaurants, bars, and human interaction for the soldiers. One of these particular interactions is boxing. See, the local general doesn’t like many things, but he happens to absolutely love boxing, and brings in various champions for the townsfolk to compete against. He even made a standing offer: any townsfolk who actually won a match would be granted passage out of the outpost and into the States, along with one other person of their choosing.

One particular girl living in the town is named Carmon Garron. She’s young, pretty, lives with her cousin, and makes just enough money waiting tables at a local diner that she can scrap by for herself and her son. One day, however, she meets Martin. Martin, she quickly discovers, isn’t entirely normal, but this doesn’t stop a passionate affair from brewing. Unfortunately, Martin is discovered, and is forced to leave the outpost just after finding out he’s managed to impregnate Carmon.

The child, named Loup, turns out to be different like Martin is. Which is a problem, because the government would love to get their hands on her, and she’s not terribly good at hiding.

This is mostly backstory, however. The majority of the plot revolves around Loup’s interactions with the townsfolk and other people her age as she grows from a child to a teen to a young adult. Romance and drama and action and life lessons are delivered unto Loup, and by extension, the reader, in a concise little coming-of-age story. About girl's love and boxing.