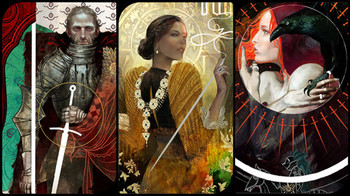 The soldier, the diplomat, and the spy
"There is a locked door and your goal lies on the other side. What do you do?"
1. Smash the door down.
2. Try and pick the lock.
3. Knock.
— Knights of the Old Republic
Advertisement:

A form of gameplay non-linearity, found mostly in Role-Playing Games, especially Western RPGs, wherein the player can beat individual levels or subquests (or sometimes even the entire game) by sticking largely to one of the three playing styles:

This trope is about having to choose between these three approaches, not about having a specialist for each in the Player Party (though they usually do — for that, see Cast Speciation).

Subtrope to Three Approach System. Compare Fighter, Mage, Thief where all three are combat-oriented, just with different approaches at it. Contrast RPGs Equal Combat, where no (meaningful) non-combat options are provided, and Useless Useful Non-Combat Abilities, where non-combat paths are available in theory but rendered useless by the game design.