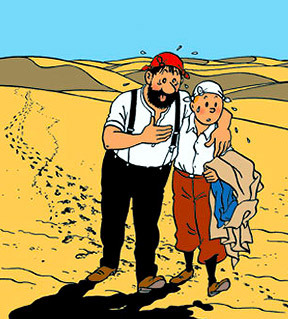 Baylene: Oh my goodness. It looks like a very long walk.
Eema: And hot! If you smell something sizzling, could be me!
— Dinosaur
Advertisement:

On his neverending quest to find the MacGuffin, Hero Bob must cross a desert wasteland. Expect there to be scorpions, cacti, a few Ribcage Ridges, and maybe even a Sand Worm or two. A sandstorm is also likely. For whatever reason, rather than travel during the night, Bob will nearly always travel starting at high noon, though this can be justified by the planet having multiple suns, or the desert having some kind of curse, or what have you. If Bob's travelling with Alice, Carol, and Dave, expect at least one of them to suffer from heat stroke, and another to see a Hollywood Mirage.

May be a Thirsty Desert. Watch out if so. In times of war, Desert Warfare can often overlap with this for any belligerent faction trying to cross through here. Contrast Braving the Blizzard in temperature.

In Video Games, the setting itself will have some or all the traits of the Shifting Sand Land, and there'll usually be some aversion of Gameplay and Story Segregation, either by way of taking damage due to the extreme heat, or getting lost easily due to each screen looking nearly, if not completely, identical.