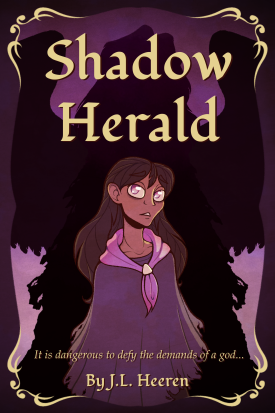 That’s not an angel.
Heralds of Rhimn is an LGBTQ+ Dark Fantasy series authored and designed by J.L. Heeren. The only book out in the series is Shadow Herald as of May 2021, but the author has stated that the total series will be a quartet with the next books listed as Frostbitten Prophet, Ember Warrior, and Breathing Gods.
Advertisement:

In the magical world of Rhimn, where few gods remain and each has an agenda of their own, a Herald is a god’s highest servant — bound to carry out their god’s will until the day of their death.

But not every Herald is happy with their role.

Heralds of Rhimn follows Navaeli the Shadow Herald as she struggles against the yoke of her demanding goddess, Silamir. She finds romance in a handsome hooligan girl, Crislie Crimsworth, and kinship with a young feyrie thief named Meparik. But this newly-knit family of misfits also finds strife as the feyrie folk of Rhimn prepare to fight the cruel sun god and his regime of iron-clad knights.

Navaeli, Crislie, and Meparik must navigate the perils of politics and revolution together, or become just another casualty in the newest spat between the gods.