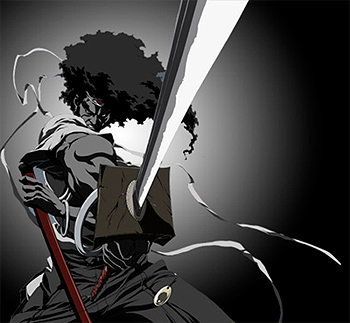 "Nothing personal. It's just revenge."
Advertisement:

Set in a Schizo Tech version of something that may or may not be feudal Japan, the story revolves around the titular character (played by Samuel L. Jackson) and his quest to avenge his father's death by defeating the strongest warrior in the world. The idea goes that whoever wears the "Number One Headband" is the unquestioned biggest badass on Earth, but he or she can only be challenged by the person with the Number Two band — which is, at the moment, Afro. Making Afro's life a lot more complicated is the fact that any regular schlub can challenge for the Number Two and with it, the right to try for the big prize.

The five-episode series premiered in North America and aired between January 4, 2007 and February 1, 2007 on Paramount Network (formerly Spike TV). The sequel movie, titled "Afro Samurai: Resurrection", premiered on January 25, 2009. Tired of all the killing, Afro has retreated away from the world. Unfortunately, Kuma and his sister, Sio, find him and take the Number One Headband. Sio plans to resurrect Afro's father, and force Afro to fight him to atone for all the lives he's ended. Afro must once again find the Number Two Headband, to earn the right to challenge her before she's able to do so.

There's also a ten-chapter manga version. It uses elements, characters, and events from both movies, while changing many things. According to the creator, it's the closest to the original doujinshi the series is based on.

A video game adaptation of the first season was released in February of 2009. An Interquel starring Kuma tiled Afro Samurai 2: Revenge of Kuma was released late in 2015 as an episodic game, but was later cancelled by its publisher after a string of poor reviews.

Not to be confused with flash game developer Afro Ninja.