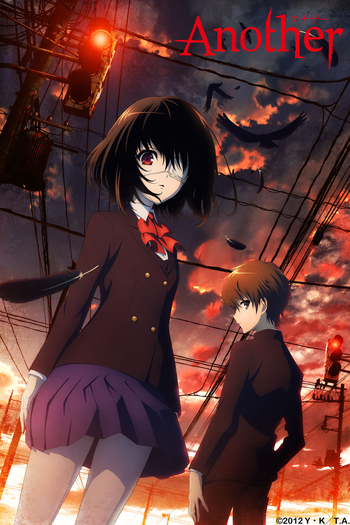 "The school is a place that is very close to death, especially the 9th grade's class 3. It's much, much closer to it than the other classes."
—Mei Misaki
Advertisement:

A horror/mystery novel by Yukito Ayatsuji, adapted into manga and an anime by P. A. Works for the Winter 2012 anime season.

Twenty-six years ago, in the 9th grade's class 3 (Class 3-3) of Yomiyama North Middle School, there was a student named Misaki. As an honors student who was also good at sports, the charming boy was popular with his classmates. When he suddenly died, his classmates decided to carry on as if he were still alive until graduation. Then, in the spring of 1998, a boy named Kouichi Sakakibara transfers to that classroom, and he grows suspicious of the fearful atmosphere in that classroom. In particular, he becomes curious about an aloof girl with doll-like beauty named Mei Misaki who wears an eyepatch and is always alone, drawing pictures. Soon, students around him start dying in gruesome ways, and now Kouichi has to solve the mystery of the event that has taken the lives of so many students throughout the classroom's history if he wants to break the cycle of death that has plagued this school for decades.

For those in the US, the series can be watched legally at Crunchyroll

A Live-Action Adaptation in a form of a movie aired in Japan on August 4, 2012.

Compare Final Destination for another work in which people die from bizarre, supernatural "accidents."