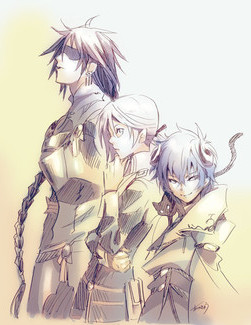 Ratovania was once a proud nation of valiant knights and honorable, beloved kings. However, that all changed when Duke Demonas launched a coup on the unsuspecting nation. The Crown Prince was forced to flee, Demonas murdered the king, beheaded the queen before the princesses' very eyes, and took her as his bride-to-be. But before he can marry her, he chooses to bring several prisoners to the chapel, and announces that all those who cannot thoroughly entertain them will have their blood used to make a crimson wedding gown for Princess Leticia.

A young man in a cloak steps forward and offers to entertain them using magic. His power allows him to turn a small dove into a massive prehistoric bird that he commands. King Demonas decides to spare the boy for his impressive skill, only to be beheaded and for the young man to reveal himself as Prince Lucas Orvice Calene Ratovania, the lost prince, now wielding the incredible power of antimagia.

Things will not be so simple, however, as there are those who would still vie for power in the yet-to-stabilize kingdom of Ratovania. However, he won't be alone. Leticia, Lionel, the former king of the guard, and Alowa Bashur, a young scholar obsessed with his power will be by his side.