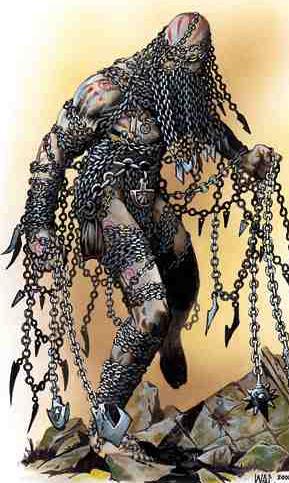 They've tried belts, zippers, crystals, wings, bones, and even their kid sister's glowy floaty sparkles, but none of those made them look badass and super powerful (more like a cute Rummage Sale Reject)... so what's a budding Mons, summon monster, or enslaved freedom fighter to do?

Get Chained, by Fashion.

Simply put, characters who are impossibly powerful tend to be incredibly dangerous, so they get limited, sealed, or bound to imprison them (in this particular case it must have been with chains). Like that'll work. To show this, when the chains inevitably break because the character is just that powerful, they'll often choose to keep the locked manacles as reminders of their captivity (humility, rare) or displays of their indomitability (pride, common). Then, there's always cases where they either can't remove the manacles or don't care to.

The manacles will have short lengths of chain still attached, which will rarely ever impede movement and will nonetheless still be long enough to act as whips or to choke opponents. Sneaking up on someone while hauling noisy chains around can prove difficult, which may constitute The Croc Is Ticking.

For a little something extra at the end of your chain, see Chained Heat. Needless to say, expect this trope to be fanservice for some. For chains as Improvised Weapons, see Chain Pain.

The Burrower is a ground-dwelling malefactor wrapped in chains.

The Burrower is a ground-dwelling malefactor wrapped in chains.