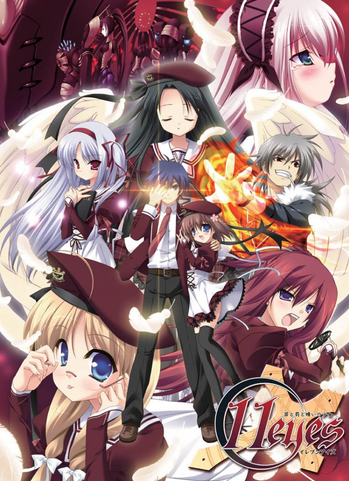 Five years ago, Kakeru Satsuki's older sister committed suicide. Since then, his right eye has become a shade of gold, and he wears an eyepatch to cover it. The only people he's friends with are his childhood friend Yuka and classmates Kaori and Tadashi. But inside, he has no interest in anything. While walking home with Yuka one day, the world suddenly changes. The sky becomes red, the moon becomes black and Eldritch Abominations called Larva roam the street. This is just the beginning of what is about to unfold.
Advertisement:

A unique feature of the game is the Cross Vision mode, which allows the player to see events that have already happened from a different character's perspective. This is necessary, since Kakeru's narrative alone can't capture the whole story.

11eyes -Sin, damnation and the atonement girl- is a Visual Novel released by Lass in early 2008. In early 2009, a second story was created, titled 11eyes -The Story of Another side-. The second story has an almost entirely new cast, and promotes minor characters like Shiori and Kaori to main character status. These two stories were grouped together into an Updated Re-release for the Xbox 360 titled 11eyes CrossOver.

The series also has a Gaiden Game, 11eyes -Resona Forma-.

The game is a indirect sequel to 3days, an earlier novel. Several characters between the games are related.

An anime adaptation, covering Sin, damnation and the atonement girl's story, aired in the fall of 2009 and is now playing

on the Anime Network.

Can also be viewed legally at Crunchyroll here.