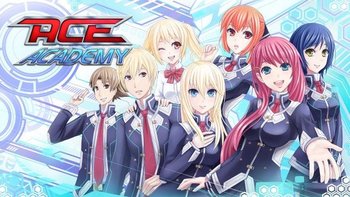 ACE Academy is a comedy-centric, slice-of-life, visual novel, with sci-fi and romance elements. It was published and developed by PixelFade Studio.

In the year 2049, mechanized robots called GEARs have become commonplace due to their versatility. And ACE Academy is Japan's premiere school for "Cenorobotics", a new academic field focused entirely around these robots. When an American student, default name: Tristan Spade, and his personal GEAR are transferred to ACE Academy due to unforeseen circumstances, he struggles to fit in at first. But soon, he encounters a group of young pilots desperate for a new member to their team. Together, they might just win the upcoming intramural tournament, and perhaps even find romance along the way...

A shorter sequel was later released called Kaori After Story, unsurprisingly following on from Kaori's ending.