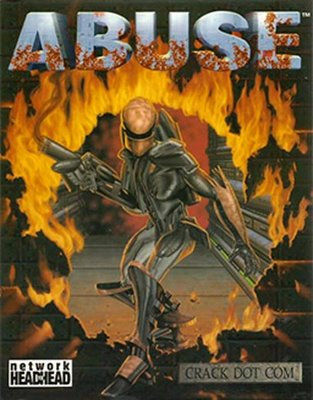 A little-known gem from the days when platformers were still big on the PC, Abuse is a dark (both literally and figuratively) platform shooter created by Crack Dot Com, co-founded by former id Software programmers Dave Taylor and Jonathan Clark, and published by Origin Systems, by then a division of Electronic Arts, in 1996.

Set in the year 2009, Abuse puts players in the shoes of Nick Vrenna, a man unjustly incarcerated in a maximum-security prison that is being used for ethically-questionable experiments. Predictably, all hell breaks loose when inmates and staff get transformed into monsters by a biological agent called Abuse. Only Nick is immune, so he decides to take advantage of the chaos by stealing a suit of Powered Armor and making good his escape. note The original story, from the very first release, was actually a throwaway one where Earth is invaded by the mutants and Nick is the only one who can stop them.

The player must guide Nick through a series of increasingly difficult, sometimes maze-like levels while shooting Mutants, robots and turrets with eight distinct weapons. The game was known for its convincing atmosphere and silky-smooth controls which included a unique mouse-aiming system, an unprecedented feature that earned it the moniker of "Doom in 2D." The game shipped in a very mod-friendly state, with a fully functional map editor and a rudimentary sprite/texture editing program. The source code has been freely available since the late 90s.

It was also distributed to the Macintosh via Bungie Studios (yes, that Bungie) and was a game in the Mac Action Sack. It later received an Amiga OS 4 port in 2009, and an iOS port titled Abuse Classic. The game is also being freely distributed through DESURA for Windows, Mac, and Linux, with the help of DOSBox. For those looking to play the game on modern systems without DOSBox, a fan-made SDL port can be found here

. Definitely not to be confused with Abuse Tropes or Useful Notes: Abuse.

Tropes this game displays include: