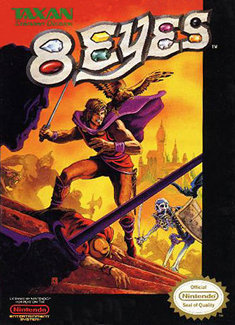 8 Eyes is an Action Game developed by Thinking Rabbit, published by Seta Corporation in Japan in 1988, and by Taxan Corporation in North America in 1990.

The story takes place in the aftermath of a nuclear war. After a Great King helped rebuild the world with the power of mysterious jewels he called the 8 Eyes, his generals turned against him and stole the gems for themselves, banishing him to the nuclear wastes before he could complete his duty. It now lies upon Orin, a swordsman and falconer, to fight through each of the generals' castles and defeat the strange creatures and soldiers within in order to retrieve the gems and help the Great King complete his mission.