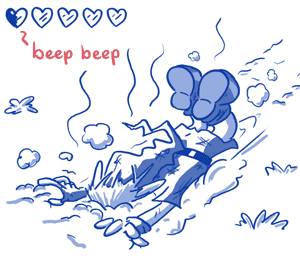 Now might be a good time to heal...
Red Warrior is about to die!
"Dammit, I know!"
— Kingdom of Loathing's Dungeon Fist minigame
Advertisement:

(For the proper experience, run the "music" from this video

In games where the player character(s) have Hit Points or some other measure of health, it's not uncommon for the game to warn the player that their health is low. After all, if their life meter depletes, it's Game Over, and the resulting consequence can be anywhere from a minor headache to a Rage Quit inducing catastrophe. However, while making a warning sound like a beep can definitely be effective in alerting the player to their condition, playing said sound over and over again is pretty much guaranteed to get on the player's nerves.

This warning is ubiquitous in games with hit points or a life meter. It might become annoying such that the player is less likely to play carefully when health runs low. On the other hand, when a game does avert it, and you end up dying because you didn't notice your health was low, you may start to miss it.

Some games use a Heartbeat Soundtrack as this sound. Some will have a character making the sound In-Universe, doubling as an example of Annoying Video Game Helper.

Game developers have started to pick up on the fact that this noise can drive certain players to near insanity, and merciful ones opt to downplay this trope in one of a few ways in more contemporary games, making this somewhat of a Dead Horse Trope.

It is partly Truth in Television, except in Real Life, signs can usually be much, much worse.

A noise consisting of eternal beeping occurs whenever Link runs low on health. While Link is (seemingly) oblivious to the beeping, Ganon certainly takes notice and it drives him up the wall.

A noise consisting of eternal beeping occurs whenever Link runs low on health. While Link is (seemingly) oblivious to the beeping, Ganon certainly takes notice and it drives him up the wall.