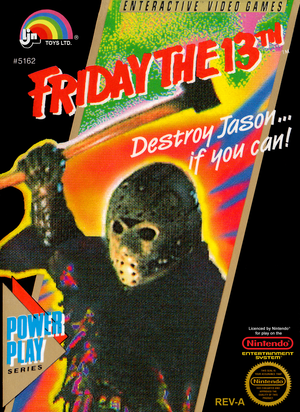 You and your friends are dead.
— The infamous, but slightly cool, Game Over screen
Advertisement:

This game puts you into the role of one of six camp counselors, who must protect themselves and the kids from the wrath of the Ax-Crazy Jason Voorhees. The gameplay consists of wandering from cabin to cabin, waiting for Jason to enter one so you can fight him. The game takes place within three days and Jason grows stronger with each passing day. Your ultimate goal is to survive and defeat Jason.

Your main weapon is a bunch of rocks which have a tough time hitting anything. The map screen makes getting lost and confused very easy. And Jason's mask is light blue for no reason.note Okay, technically there is a reason. It's speculated that the design was based on this poster

for Friday the 13th Part III, which, partially due to lighting and partially due to the poster being in 3D and thus overcompensating for the viewer seeing it with red and blue glasses, gives Jason the appearance of having a purple outfit and cyan mask In general, this game is not very well liked, though some people have derived some enjoyment after figuring out how to play it.

◊ based on Jason's appearance in the game has been made.

For the 2017 Friday the 13th game, go here. Incidentally, this game's version of Jason was added to it as free downloadable content on June 20, 2017.