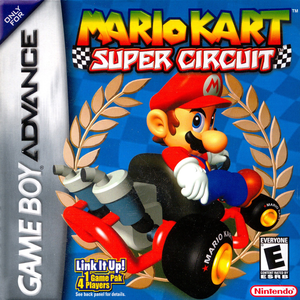 Your family road trip is advancing to a new level... and one red guy is leading the charge!
Mario Kart: Super Circuit is the third game in the Mario Kart series, released for the Game Boy Advance in 2001.
Advertisement:

This is the only Mario Kart game that was developed by Intelligent Systems, who also made the Fire Emblem and Paper Mario series.