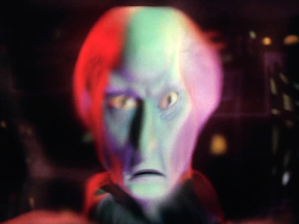 This face was a mainstay of the closing credits for some time. Now there's a delightful image to leave viewers with.
Advertisement:

An ordinary day on the Enterprise. Kirk is taking a required physical, so Spock has the chair. Suddenly, they run into what looks like the Apple Spinning Beach Ball of Doom that they just can't seem to escape. When evasive maneuvers fail, Spock calls for a red alert. Navigator Bailey, who's struggling to deal with all this, suddenly becomes a little trigger happy until Kirk reminds him who's in charge. Kirk tells Bailey to plot a spiral course at increasing speeds to get away from this Negative Space Wedgie. When it starts emitting radiation, Kirk orders to open fire, destroying the object.

Just when everything looks peachy keen, the Enterprise is caught in the tractor beam of what looks like a cross between the EPCOT's Spaceship Earth and a popcorn ball. The message identifies the sphere as the Fesarius, the flagship of the First Federation, and the speaker as her commanding officer, Balok. Balok announces that the crew of the Enterprise has exactly ten minutes to bend over and kiss their collective asses good-bye. If only Kirk can come up with a cunning plan....