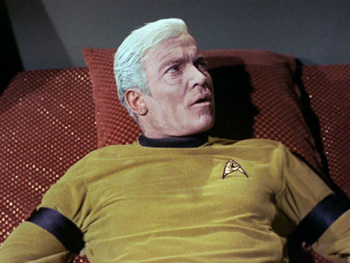 It's funny looking back on this one, since William Shatner is now in his 90s and still doesn't look at all like this.
Advertisement:

It all starts when Kirk, Spock, Bones, Scotty, Chekov and Lt. Arlene Galway (A Redshirt who knows how to rock a pixie cut and a blue mini dress) beam down to Gamma Hydra IV to check up on a colonization party. It looks as though everyone died of old age, though they haven't been there that long. They find a couple still alive who claim to be in their late twenties, but they look positively ancient. The couple is brought aboard the Enterprise for examination, but little can be done for them. It becomes even more imperative to learn how to halt this Rapid Aging when the landing party begins to do the same. Commodore George Stocker moves to have the rapidly aging Kirk relieved of duty- and transferred to him, seeing as how all other senior officers are likewise suffering. He holds a hearing where the crew is forced to admit that, yes, Kirk's absent mindedness has been affecting his ability to command. Stocker takes command and drives the ship straight into the Romulan Neutral Zone. Fortunately, Bones has discovered the antidote just in time and Kirk is ready to save the day.

Fun fact: Felix Locher, who plays the prematurely aged Robert Johnson, is in fact the oldest person ever to appear in Star Trek, born in 1882. He had turned 85 years old a few weeks before his scenes were shot for the episode. (Robert's wife Elaine was played by the much younger Laura Wood, born in 1901 - though this was Wood's second appearance as a prematurely aged character on the show, following a brief but memorable scene in "Charlie X".)