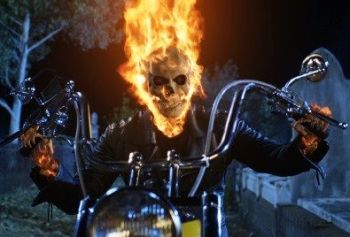 Can you feel the heat?
Drive-Thru Whale: Would you like flaming skulls with that?
Strong Bad: Do you have to ask?
— Strong Bad's Cool Game for Attractive People Episode 2: Strong Badia the Free
Advertisement:

Skulls are cool. Fire is cool. This is what happens when the two have a baby in your brain.

When this feature is present on an actual individual, it may be related to Glowing Eyelights of Undeath, where the flames manifest as the energy or evil spirit possessing them.

Almost always tied to Evil Is Burning Hot. It's very rare to have a purely heroic flaming skull, so expect the usage to at least signal some moral ambiguity.