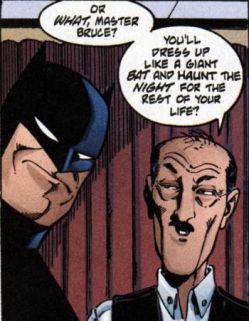 It takes a butler like Alfred to snark at the Batman. Regularly.
Bertie Wooster: Do you think I should play Minnie the Moocher for the Glossops tonight, Jeeves?
Jeeves: I could not advise it, sir. I have not heard that Sir Roderick is musical.
Bertie Wooster: Oh, but Lady Glossop is.
Jeeves: There is also that to be considered, sir.
— Jeeves and Wooster
Advertisement:

You wouldn't like taking orders from some pompous, rich higher-up for a living, would you? Well, neither does the Servile Snarker. Often the only way to express that resentment or question your employer's decisions is to snark at them for all it's worth—after all, what are they going to do, fire you?. Some employers may genuinely enjoy the banter or value the valet's second opinion (even if they end up disregarding it.). Some might even consider them a member of the family and know that there's genuine love behind the mocking.

The Servile Snarker is a combination of a Deadpan Snarker and The Jeeves (although the original Jeeves, as the above quote shows, can be pretty snarky). Thus, any butler, maid, slave, servant, whatever, who is heavily sarcastic to their master and/or their master's guests and yet still manages to keep their job is this trope. They are often a master of the Stealth Insult, and of Mirth to Power.