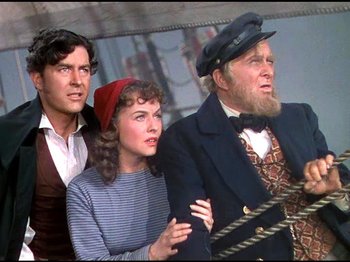 Reap the Wild Wind is a 1942 adventure film by Cecil B. DeMille, based on a serialized story by Thelma Strabel.

The film is set in the 1840s along the Florida coast. Our protagonist is a spirited young woman named Loxi Claiborne (Paulette Goddard). She runs a marine salvage business and that's how she meets Jack Stewart (John Wayne), captain of a ship called the Jubilee that she rescues from the hurricane. Jack desires to captain a ship called the Southern Cross, and Loxi takes it upon herself to seduce Steve Tolliver (Ray Milland), the head of the sailing ship line that Jack works for. There's also trouble afoot involving another salvor called King Cutler (Raymond Massey), who may be planning wrecks so he can claim the salvage. And for some added spice, Cutler's brother Dan (Robert Preston) is having an affair with Loxi's cousin Drusilla (Susan Hayward).