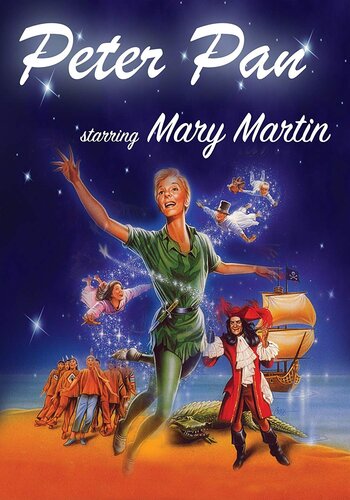 "And that's my home where dreams are born,
And time is never planned
Just think of lovely things,
And your heart can fly on wings... forever!
In Never...Never... Land....!"
— Peter Pan, "Never Never Land"
Advertisement:

Peter Pan is a musical adaptation of the play of the same name, first produced in 1954. Most of the songs are by Mark "Moose" Charlap and Carolyn Leigh, with additional songs by Jule Styne and Comden and Green added during the out-of-town tryouts. The original production starred Mary Martin as Peter (the musical continues the tradition of cross-casting women as young boy Peter to this day) and Cyril Ritchard as Captain Hook.

It is not the only musical version of the story, but it is the version most people think of when they think of Peter Pan: The Musical. Its notability can be attributed to the fact that NBC aired live stagings of the play several times between 1955 and 1960, to excellent ratings. The 1960 production was released on VHS tape (and DVD since), making it the canonical version of the show. This would be the final live televised musical for more than half a century, until The Sound of Music in 2013. December 4, 2014 saw NBC televise yet another live performance of Peter Pan, with Allison Williams as Peter, and Christopher Walken as Captain Hook.

NBC finally finished releasing all four of their Peter Pan televisings on DVD and/or Blu-Raynote Only the 1955 and 1956 productions received a release on the latter format by September 2015, through various studios. A 2000 taping of a live stage production, with Cathy Rigby as Peter Pan, has also seen VHS and DVD releases.

The 1954 play and its TV adaptations contain examples of: