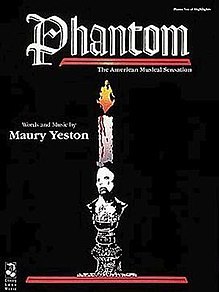 An adaptation of The Phantom of the Opera overshadowed by Andrew Lloyd Webber's musical in much of the Western musical theatre world, Phantom was written by Maury Yeston (music) and Arthur Kopit (book). Initially, it premiered as a 1990 television miniseries starring Charles Dance as the Phantom, before finally gracing the stage as a musical in 1991 starring Richard White. The first cast recording of Phantom was done by the Houston cast of Theatre Under the Stars.

Yeston and Kopit's Phantom is more operetta-like in style than Lloyd Webber's, seeking to reflect the 1890s period, with a French atmosphere to reflect its Parisian setting. Its story hews more closely to the Leroux novel and offers a deeper exploration of the phantom's past and his relationship with Gérard Carrière, the head of the Opera House. The portrayal of the titular character is also more sympathetic than the Lloyd Webber version.

Even though it had never made it to Broadway or the West End, Phantom has been performed in the U.S., U.K., Japan, Korea, Finland, Germany, Australia, and translated for non-English speaking audiences. The Takarazuka Revue reworked the show, and it has become one of Zuka's beloved properties. As of 2020, it has been staged four times, the last in 2018-2019 with Nozomi Fuuto in the title role.

This musical contains these tropes: