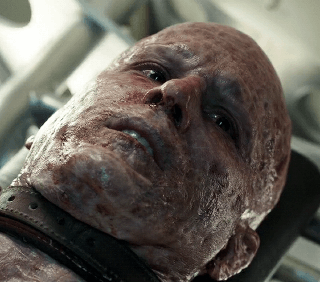 "You look like Freddy Krueger face-fucked a topographical map of Utah!"
"OH MY GOD, what's wrong with your face!?"
— Mr. Plinkett, RedLetterMedia
Advertisement:

Much like audiences get squicked out by horrible things happening to our body or our eyes, so too do they get absolutely sickened by the thought of something horrible (and permanent!) happening to our faces. It's the #1 part of the body we use for socializing and is strongly tied to our sense of personal identity, so in essence, destroying a person's face is the equivalent to destroying his or her life. It can often lead to a Nightmare Face, but if the victim is lucky, he can maybe at least achieve the level of The Woobie or even Ugly Cute. This trope can include those who die from the disfigurement, but it's more effective (and more horrifying) to have the victim live with it.

Compare and contrast to Nightmare Face. The main difference between these two tropes is that Facial Horror deals specifically with severe mutilation of most or all of the face, whereas Nightmare Face covers exceptionally scary faces in general.

Interestingly, even the most gruesome examples of this trope will often, like Two-Face from Batman, leave the eyes completely intact. Perhaps this is to emphasize the facial disfigurement by contrast, or merely a sign that Eye Scream is a whole different level of horror. Or perhaps it's so that the victim can see himself in a mirror.

Contrast: Sunken Face where the disfigurement is played for pure comedy.

Suffice to say, the effects of "spectral frequencies" aren't pretty.

Suffice to say, the effects of "spectral frequencies" aren't pretty.