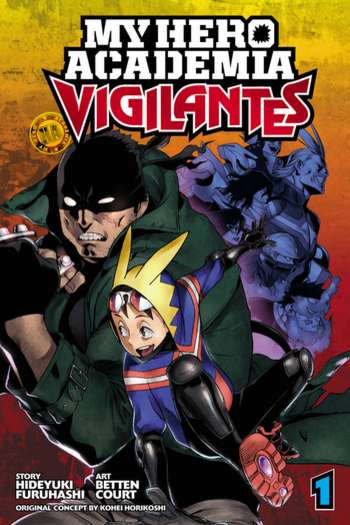 Not everyone needs a license to fight for justice!
Advertisement:

19-year-old Koichi Haimawari always dreamed of being a hero but didn't think he had a good enough Quirk. Instead, he spends his free time sliding around town doing basic good deeds like picking up litter or helping lost children find their parents. Content with his lot in life Koichi never expected to be thrown into the world of heroes, but an unexpected run-in with the Vigilante, or illegal hero, Knuckleduster changes his life forever.

My Hero Academia: Vigilantes is a spin-off series of My Hero Academia, which was serialized biweekly from August 20th, 2016 to May 28th, 2022 on the ShonenJump+

website and app (as well as Viz Comics’ Shonen Jump app in English-speaking countries and Shueisha’s Manga Plus app everywhere else), with occasional bonus chapters in the quarterly Jump Giga magazine. Written by Hideyuki Furuhashi and illustrated by Betten Court, this manga, set some time shortly before the events of the main series, details the story of a group of unlicensed heroes.