One Degree of Separation 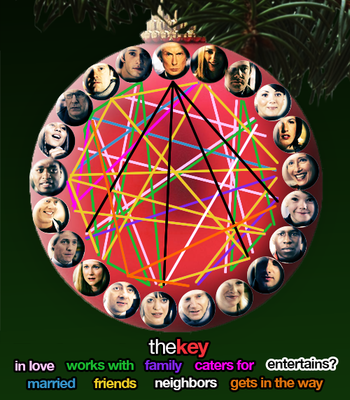 Love (and other relationships) actually is all around.note Diagram made by ilovecharts

Say one day you meet a girl and fall in love. Nothing wrong with that. However, on your wedding day, when you meet her father, you remember that he's the guy who failed you in biology in the twelfth grade. Okay, odd, but not inconceivable. But wait, isn't her mother the one who sat next to you at a bus station five years ago and gave you great life advice? And her cousin looks familiar, too. Hold on, it seems you've met her entire family at one point or another throughout your entire life.

And then she comes up to you and reveals that she's met your whole family before as well. In fact, you are her father's brother's nephew's cousin's former roommate. It seems there's only One Degree of Separation.

This is where every character is tangentially connected to almost every other character. It doesn't matter if it's an Easter Egg or important to the Myth Arc. Everyone's connected. This trope does manage to somewhat be Truth in Television: in the 1960s, American social psychologist Stanley Milgram's "small-world experiment" found that the average connection between any person in the United States as being around three friendships. While more recent studies on global links between any random person are more inconclusive, games such as Six Degrees of Kevin Bacon show that the "six degrees" concept is at least true when restricted to people within the same professional field, such as actors or musicians.

A Super-Trope to Already Met Everyone, Everyone Is Related and Everyone Went to School Together. Often part of a Jigsaw Puzzle Plot or a Hyperlink Story. Sometimes just a lot of Contrived Coincidence. See also Generation Xerox. Gets much more complicated when you have a large cast who all seem to know each other. Or if they don't they quickly do thanks to You ALL Share My Story. Can be seriously aggravated by the presence of Immortals, also prevalent in Generation Xerox. Subtrope of Connected All Along.

Not to be confused with Six Degrees of Separation, which does nonetheless use a version of this trope.

Linus then asks "What about the king?" and gets beaned with a typewriter.