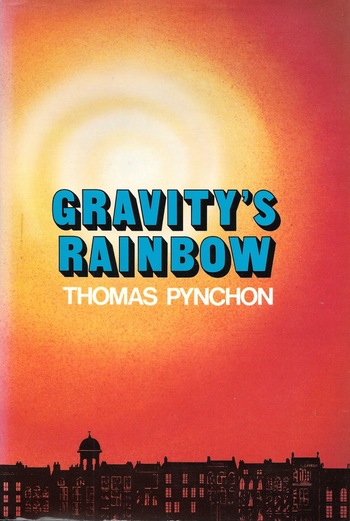 Gravity's Rainbow is a 1973 novel, a postmodern Doorstopper by Thomas Pynchon made of Mind Screw that split the Pulitzer board to the extent that no award was given that year. Gravity's Rainbow is set during the closing months of World War II, with flashbacks to 19th-century Madagascar, Weimar Berlin and 18th-century New England, and a flashforward to 1970s Hollywood, and breaks every rule of plot. Here we go now:

American soldier Tyrone Slothrop is hunted by a wing of British scientists, media men, military personnel and lunatics called The White Visitation, after it comes to light that every time he has sex with a British woman, a V2 rocket hits the house within days and that his erections may be able to predict V2 attacks on London. Slothrop, addled by justified paranoia, goes AWOL and, along with dozens of other characters, hunts for the truth behind a top-secret German rocket known as the Schwarzgerät or '00000', while being sidetracked by movie producers, Berlin drug dealers, and an affair with a witch. Meanwhile, a Russian Marine sets off to hunt down and kill his black half-brother, who is currently leading his platoon around Europe toward an ethnic suicide, and various characters form an inept Counterforce to the novel's conspiracy networks, along with about 30 other subplots.