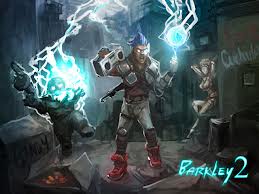 The follow up to Barkley, Shut Up and Jam: Gaiden, also known as "The Magical Realms of Tír na nÓg: Escape from Necron 7 - Revenge of Cuchulainn: The Official Game of the Movie - Chapter 2 of the Hoopz Barkley SaGa"
Advertisement:

The year is 666X. A powerful youngster, wise beyond his years, awakens from a B-Ball induced coma aboard the mysterious dwarf space ziggurat Necron 7, held captive by the Malevolent A.I. Cuchulainn.note Cuchulainn tricked Charles Barkley into freeing him with the promise of Incan Gold. With no memory of who he is or where he came from, he adopts the identity of X114JAM9 and sets off into the Post-Cyberpocalyptic Wasteland in search of the enigmatic Cyberdwarf, the only one who can reveal to him the terrible truth behind his forgotten past and make sense of his harrowing future.

After having a successful Kickstarter in 2012, the game has languished in Development Hell. A Kickstarter update in June of 2019

revealed that several important team members have left the project but promises to continue development.

In 2021, the remaining developer, Paperjack, released what was already made for the game to open source and effectively cancelled the project.

This game uses some of these tropes: