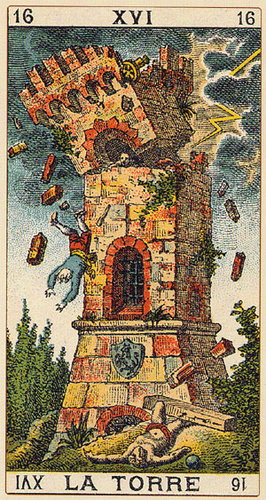 "So this is the stand that brings calamity! The one they call...Tower of Gray!"
— Muhammad Avdol, JoJo's Bizarre Adventure: Stardust Crusaders
Advertisement:

An old trope that can be either physical or metaphorical in its appearance within a story. In Tarot reading, The Tower is considered a sign of ill omen or adversity, but can also stand for civilization, higher learning, or lone, defensive strength when regarding a specific character.

Usually, The Tower is a structure of solitude or homage to a character whose vision is farseeing and above those "bound to earth". It can also be a prison to where a main character is left to die, or a representation of a villain's Pride, as (s)he rises higher towards heaven while surrounded by their empire. See the Biblical story of the Tower of Babel.

This has a certain historical basis: medieval castles were typically built around a central tower, called the keep or donjon, which couldn't really be targeted by siege weapons and would continue to resist after the rest of the castle fell. The donjon was the most secure part of the castle, and so the lord and lady lived there, treasure was stored there, and prisoners (typically held for ransom) were kept there — thus the modern English meaning of "dungeon."

A character that represents the Tower is another story, they can be a tall figure, or even a dwarf with a great amount of presence. They usually have great fortitude both mental and/or physical, sometimes coming off as stubborn or gruff. They're also portrayed many a time as loners unless with others who share a similarity with him, or need him for a time. The phrase "ivory tower" ties together the connotations of isolation and pride into a concept that intellectualism or academic research make you lose touch with "real life".

In many fantasy settings, towers are usually the homes, laboratories and/or schools of magic users. This probably goes back to the Middle Ages, when astronomers lived in towers to more conveniently observe the stars, and when not all astronomers were magicians but virtually all magicians were astronomers; a famous, possibly Trope Codifier example in modern fiction is Saruman's tower Orthanc, the keep of Isengard.

Most works of fiction ignore the stairs issues when working in settings prior to the invention of elevators, but in real life, high towers would be not be the prime location to live or work unless you never descended.

For cases when man's Pride sends him too far in the other direction, see Dug Too Deep.

The Tower is Card XVI in the tarot deck, although mostly symbolic. In the Rider-Waite deck, it's a tower being shattered by lightning. Generally speaking, it represents either a truth unearthing something not pleasant, a tale of pride not unlike the Tower of Babel, or both. Related tropes to the tarot card are Heroic BSoD, Break the Haughty, and Go Mad from the Revelation.

In fiction, the Tower may appear as:

The Mobile Maze or Dungeon is the inverse trope: a more expansive version of the Ominous Castle or Megastructure, with more stuff below than above. See also Big Labyrinthine Building, which may or may not be a Babel-like megastructure. Compare with Building of Adventure.