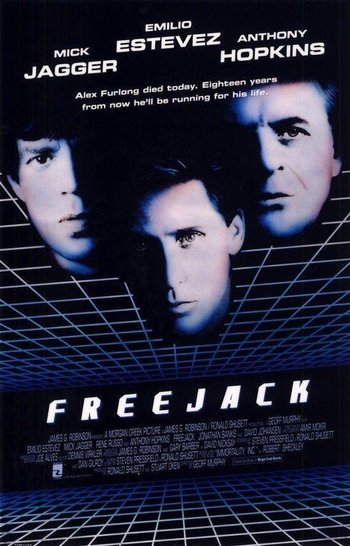 A 1992 sci-fi film directed by Geoff Murphy, starring Emilio Estevez as Alex, Mick Jagger as Vacendak, Anthony Hopkins as McCandless, and Rene Russo as Julie. The film is a dystopic Cyberpunk film supposedly based on Immortality Inc. by Robert Sheckley.

The plot revolves around Alex Furlong, a race-car driver in 1991 who, seconds before a horrific car crash that would kill him instantly, is transported to the far-flung and horrifically Dystopian Cyberpunk Polluted Wasteland future of... umm, New York 2009, where he discovers his body is to be harvested to ensure the survival of dying billionaire Ian McCandless, and must evade McCandless' mercenaries led by Vacendak.