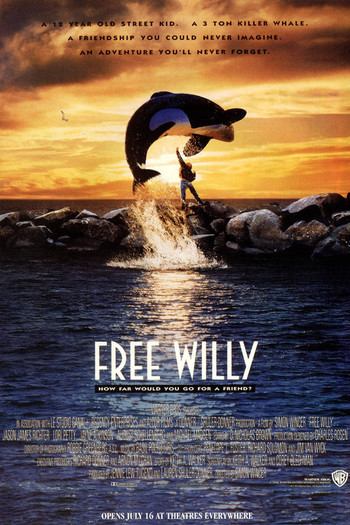 A 12-year-old street kid. A 3-ton killer whale. A friendship you could never imagine. An adventure you'll never forget.
Homer: Jump, Free Willy! Jump! Jump with all your might!
Woman on TV: Oh, no! Willy didn't make it! And he crushed our boy!
Man on TV: Eugh. What a mess.
Homer: Ohhhh. I don't like this new director's cut.
— The Simpsons
Advertisement:

Free Willy is a 1993 family drama, directed by Simon Wincer, about a boy and his orca whale.

Jesse (Jason James Richter) is a young boy caught vandalizing a marine theme park. His social worker manages to find a way that he can escape punishment, by helping out at the underwater attraction. Over time he befriends Willy, an orca whale kept in the park after being captured and taken away from his family.

Dial (Michael Ironside), the owner of the park, sees the bond between Jesse and Willy and plans on making a show of those two together. It turns out that Dial is greedy and has evil ulterior motives for the orca. Jesse and his friends are determined to find some way to save Willy from his impending death (you can kinda guess how from the title).

At the time, the movie was subject to frequent parody (especially its climax). A movement to "Free Keiko", the animal actor of the movie also was brought about by it.

Even so, the film managed to spawn three sequels: Free Willy 2: The Adventure Home (1995), Free Willy 3: The Rescue (1997) and a non-canon reboot, Free Willy: Escape from Pirate's Cove (2010) with Bindi Irwin in the leading role. There was also, believe it or not, an animated adaptation of the series produced by Nelvana that ran on ABC in the 1995-96 season, and a really weird one at that.

Tropes in the third film: